A month and 3 days later. The blog. (I am sorry in advance, but this is a longer read than my other blogs!)

I don’t even know where to begin. I’ll throw it back to some day in 2003, in the cold city of Toronto, after this little kid had just won her first ability meet Gold medal. I remember this day like it was just yesterday; walking into the Roots Store, in Yorkville, Toronto, getting ready to meet double-Olympic champion, Catriona LeMay Doan, who had just announced retirement from long track speed skating. I was there with my mom and dad, proudly wearing my Toronto Cyclones over-sized blue shirt, and obviously wearing my gold medal. I remember a few things; my hair cut wasn’t any different than it currently is, and there I was with my heart pounding. It was my turn to walk up and get a signed photo. I remember telling Catriona that I won gold in my first race ever, and that I was going to the Olympics. She signed my picture and wrote “Keep Believing in Your Dreams!”.

Fast-forward 15 years, and I still kept believing in my dreams, through thick and thin, until late December 2017 when my whole world fell apart. In a nutshell, in attempt to avoid being stubborn and listen to outside opinions, I tried new things which, in the end, did not work in my favour at all. I figured that out a little too late – one day at some World Cup, seeing my opponents pulling away from me at about 70m off the start line, and thinking “what the hell?!”. After an unreal summer of training, overcoming personal bests in the weight room and being fitter than I had been in a couple of years, there I was, not qualifying for my Olympic Games, when I had one chance left, in Salt Lake City in December. Fortunately, I knew where it went wrong & immediately mentally signed up for another 4 year cycle and promised myself I would never feel this way ever again. The disappointment and feeling of failure hadn’t really kicked in, so I thought I was managing my emotions spectacularly. “Oh well, shit happens.”. Little did I know that a week later, it would hit me like an oncoming train, and I had no where to escape. After 4 weeks of complete depression, lack of appetite, complete breakdowns on the regular & failed attempts at lifting weights + training, I decided I had to set new goals and get out of this mental and physical mess I found myself in.

Fast forward again, to the end of January. I had just finished World Cup 5, in Erfurt Germany. I did not want to go, nor did I want to ever see the ice again. Never had I ever had negative emotions toward the one thing I had loved so much. I had 5 days on ice, in 45 days, before the race began, and I had one of my better 1000m races toward the end. This qualified me for the World Championships which were after the Olympics, so I had time to go home to Canada, and train for a month and prepare. What else was I to look forward to? Changed my flight, visited Grandma for what I thought was going to be 1 week, in Romania, when I wake up to a bunch of missed phone calls and emails, with no subject, from my coach Gregg. I open the email, and it reads “ The Following Additional quota places have been made available for you : Ladies 500 – 1 Quota”. I can not even describe to you the emotions I felt in that exact moment.

We get to the Olympics, in Korea, and it seems like any other competition I’ve been to before, but this time it is just over an extended period of time. I was fortunate to have the opportunity as an Olympic forerunner, in Vancouver for the 2010 Winter Olympics. I have experienced the hype and the Olympic madness in the most wonderful way – at a home Olympics.

I got that out of my system quickly, and banked those memories. Of course Korea wasn’t as hyped up as us Canadians, and Vancouver was tough to top, experience wise. Nevertheless, it was an Olympic Games, and my first as a participant! I knew going in, that realistically speaking, I would not perform to my abilities, due to the fact (as mentioned above) that I was informed only a couple of days prior to take off, that Gregg and I were actually going to the Olympics. This allowed me to enjoy the experience, take it all in, be together with my coach, Gregg as #TeamGregg, meet people, hang out with my parents, and literally have no pressure of performance. It allowed me to have a relaxed outlook and plan my next Olympic Games where I am certain of top end performance as opposed to bottom end skating. I had a million messages of love and support, and for those I thank you all. I struggled a bit knowing that people would not see me at my best, but I know that this was for the experience, and I only get stronger from here. I am now an Olympian.

Upon arrival, we picked up our accreditation, and got settled in the room. The next day, we went to the Samsung area in the athlete’s plaza, and picked up our Olympic Edition Phone which we could use for the PinQuest collection, and taking pictures. It also came with unlimited data and a Korean number, which was very useful when leaving the village. Pin Collecting, is huge at the Olympics. You will see pin-traders all over the place. This is almost like an Olympic Sport. Seeing as we were the only 2 Romanian team members in our Village, everyone wanted our pins so we got pretty good at bargaining and having win/win situations. During the first week, we met the entire Romanian Team in the PyeongChang Village, for our flag raising ceremony, and signing of the Olympic Truce Mural (wall). Post signing, I joined president Bach for lunch, and we exchanged a few words in a few languages we both speak. The bus ride to the PyeongChang village was about 38 minutes each way, so we did not venture out there often.

Our days were filled with event watching, friend cheering, and lots of Korean food eating! I felt like I was at home. Honestly. Korean food is my main love, and everything in the Olympic Village was no different that my routine in Calgary. Usually for most first time Olympians, things could be overwhelming especially with a bigger team, and perhaps the pressure set on them from coaches, sport psychologists, etc. I was fortunate enough to prepare mentally for this, thanks to visualizing this moment for over 10 years, my mentor & sport psych, Dan Perdue, and of course my coach Gregg and friend, Hayley Wickenheiser who both have experiences coaching at an Olympics, or winning medals at multiple Olympics. I made the Olympic Village apartment my home, personalized and comfortable. I probably drove Gregg nuts for 1 whole month but luckily we are still going for another 4 years (he said yes!). Ha.

Routine can become very boring, and on day 8, I started being a little antsy. I wasn’t too overly excited with the whole set up as it was quite boring in the village, and there was nothing in the immediate perimeter of the village, for entertainment. Inside the village there was a Polyclinic where athletes could receive treatment and therapy, for free. I had gone early enough and booked massages bi-weekly, with Seong-Lye, thanks to my newest friend, one of the volunteers there, Yoojin! Each team was in a different apartment building, and some of the smaller teams were all together. We were in building 805 on the 8th level, apartment 803. Team China was also in our building, as well as Belgium, and Australia, and the Olympic Athletes of Russia. There were some other areas, like doping control, and NOC services, also located in the village, as well as a laundry facility at the bottom of the building. There was also an entertainment room, where Gregg, the pinball wizard, would win games constantly. Over time, I ended up beating him in ping-pong, and that in itself is a proud Olympic Achievement, haha. Excitement elevated after I had befriended some volunteers and athletes from other sports and looked forward to lunches and dinners being more exciting again. Sorry, Gregg, ha! (Kidding). Events like these can not properly function, without all the amazing volunteers. Hats off to every single one of you. Just wow.

Post race day, I spent the whole day with my parents, and showed them around the village, and clearly went to “Coffee Street” for coffee, because you know me….coffee lover. I won’t take you through all race day feels but I will tell you it was an amazing atmosphere, and I smiled the entire time. I am shocked at the level of calmness I had in my body, on the start line. I was cool, calm and collected and remember thinking “Really?! This is IT??!” And then “Go to the start, Ready, BAM!”.

The end of the Olympics approached very quickly. Just like the Opening Ceremonies, the closing Ceremonies were something very special; walking in with your home team, waving flags and taking pictures. I had the honour to participate in both Opening and Closing Ceremonies, and it will be an unreal memory that I will forever carry in my heart.

To come full circle, I have a picture with Catriona LeMay Doan, at the Winter Olympics, where I told her I was going, 15 years ago. I am glad I have not stopped dreaming and kept believing. Everything will happen for you all of a sudden, and you ill be thankful you didn’t give up. I encourage you all to continue doing what you love, no matter what arises on the way. You never know how close you are to getting where you’ve always wanted to go.

Thank you to all for your amazing outpour of love, support and encouragement. Thank you especially to those who believe in what is yet to come, and for not giving up on me. I would not have been there this year if it wasn’t for my  family, my Canadian support crew, my supporters all over the world, as well as my homeland of Romania. There are so many of you; the list goes on. A special thank you to my  season sponsors, Axel Merckx Project, 2XU, RYU Apparel and Rock On Clay. The future is exciting, baby!!! Stay tuned for my next big announcement – Launching my Personal Training Business! 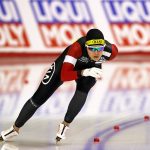 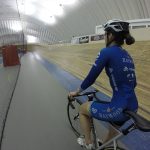